Within roughly four years, hydrogen will pass through a pipeline across the national border in the cross-border port area of North Sea Port. Gasunie, Fluxys and the port are joining forces to connect the Dutch and Belgian hydrogen networks in the port zone.

Gasunie and Fluxys are working to develop a national hydrogen network in the Netherlands and Belgium respectively. The two networks will link together in the port zone on the Dutch-Belgian border. The connection will supply hydrogen to the companies in the 60-kilometre port zone stretching from Vlissingen and Terneuzen in the Netherlands to Ghent in Belgium. Gasunie, Fluxys and North Sea Port made the necessary arrangements on Tuesday 17 May. 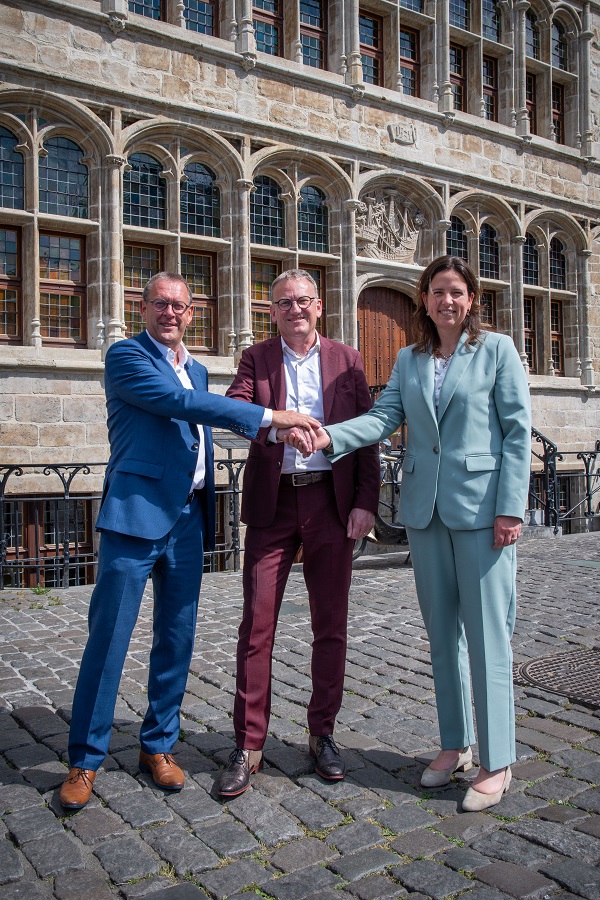 Pascal De Buck (CEO Fluxys), Daan Schalck (CEO North Sea Port) and Helmie Botter (Manager Business Development Hydrogen, Gasunie):
"All companies can connect to the infrastructure. The aim is to have the networks operational by 2026 and to join them at the border."

Working in close collaboration with industry, Fluxys and Gasunie are preparing for the construction of an open-access hydrogen network on both sides of the Belgian-Dutch border. All companies can connect to the infrastructure. The aim is to have the networks operational by 2026 and to join them at the border. This connection will mark the creation of one of the first cross-border open-access hydrogen networks in Europe. The two hydrogen networks will be connected in the towns of Sas van Gent in the Netherlands and Zelzate in Belgium, where natural gas is already flowing between the two countries. The pipes for the hydrogen network will mainly be laid along existing pipeline routes, minimising the impact on the environment.

Thanks to its scale effect, the cross-border connection will make a significant contribution towards developing the entire hydrogen value chain in the port zone, reorienting towards a green economy as well as supporting and expanding employment. The link will create an open market for green and low-carbon hydrogen in the entire port area, connecting suppliers and customers in a robust system. Linking the port zone into the national hydrogen infrastructure in the Netherlands and Belgium also gives companies access to a large hinterland as well as other industrial clusters and ports in Europe.

The cross-border industrial cluster in North Sea Port is the largest hydrogen hub in the Benelux. Every year, companies produce and consume 580,000 tonnes of hydrogen. This demand for hydrogen in the port zone will double by 2050 and will be fully sustainable by then. The cross-border network is to connect supply and demand on a large scale throughout the port zone and will boost the development of the hydrogen market. North Sea Port is well situated to develop into a hydrogen hub with a broad international appeal. This dovetails with the ambitions of and investments by Europe, the Netherlands, Belgium and Flanders in the energy and climate transition and the goal of becoming climate neutral by 2050.

Daan Schalck, CEO North Sea Port: "This new cross-border hydrogen infrastructure is an extra asset with regard to additional sustainable and circular industry setting up shop in the port area. Numerous hydrogen production and storage projects are in progress or in the pipeline. Linking two national networks in the port zone is in line with our ambition to grow as a port into a hydrogen hub on a European scale."

Pascal De Buck, CEO Fluxys: "At Fluxys we are going all out to help the hydrogen market develop quickly. The hydrogen infrastructure in North Sea Port is part of our overall project approach to help build the necessary decarbonisation infrastructure throughout Belgium and to neighbouring countries. At North Sea Port we also have concrete proposals for the infrastructure to support the capture and storage or reuse of CO2. Together with the port, industry and governments, we are committed to climate neutrality."

Helmie Botter, Manager Business Development Hydrogen at Gasunie: "Gasunie is fully committed to developing a national hydrogen network. Connections to neighbouring countries are crucially important in this regard. This will allow the hydrogen market to really grow and work to improve security of supply in northwestern Europe."