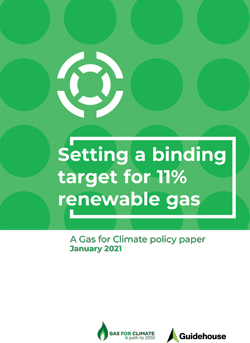 Today, the Gas for Climate consortium published a policy paper which provides an analysis-based rationale on why an 11% renewable gas target is needed to meet the EU's climate ambition to cut GHG emissions by 55% in 2030. The policy paper follows last year’s Gas for Climate Gas Decarbonisation Pathways 2020-2050 report, which showed how additional policy measures are needed to scale-up renewable and low-carbon gases. While biomethane and green and blue hydrogen are all needed to meet the EU’s climate targets, biomethane and green hydrogen need additional incentives to enable their scale-up.

To ensure an accelerated and consistent market ramp-up of green hydrogen and biomethane across the EU, the envisioned 11% target is supported by two binding sub-targets for green hydrogen and biomethane. At least 8% of the gas consumed in the EU by 2030 should be biomethane, and at least 3% should be green hydrogen. The sub-targets reflect that biomethane is commercially available today and scalable in a sustainable manner, while green hydrogen should ramp up during the 2020s too. The 3% green hydrogen target aligns with the European Commission target for at least 40GW of electrolyser capacity in the EU. A binding target for renewable gas will help to reduce production costs of biomethane and green hydrogen during the 2020s, while in the long-term help to achieve the European decarbonisation targets at the lowest societal costs. Gas for Climate foresees that an EU-wide target of renewable gas would be translated into differentiated national targets.

The policy paper on renewable gas is the first in a series of policy papers to be launched in 2021. Gas for Climate is currently undertaking new activities including setting up a European Biomethane Alliance, and a new hydrogen demand analysis.


About Gas for Climate

Gas for Climate was initiated in 2017 to analyse and create awareness about the role of renewable and low carbon gas in the future energy system in full compliance with the Paris Agreement target to limit global temperature increase to well below 2 degrees Celsius. To this end, the entire economy has to become (net) zero carbon by mid-century.