The new Gas for Climate report provides an unique overview on the latest developments in renewable and low-carbon gases: industry is ready for scale-up. 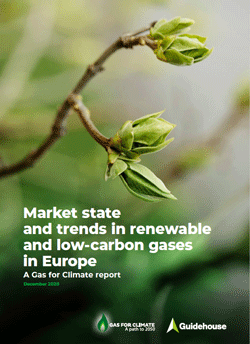 Highlights of the report


About Gas for Climate

Gas for Climate was initiated in 2017 to analyse and create awareness about the role of renewable and low carbon gas in the future energy system in full compliance with the Paris Agreement target to limit global temperature increase to well below 2 degrees Celsius. To this end, the entire economy has to become (net) zero carbon by mid-century.

In January 2021, Gas for Climate will publish a policy paper which calls for a mandatory renewable gas target. Such a target would further boost the identified trends that are needed to stay on track for the decarbonisation of the European energy system.