The LNG terminal at Zeebrugge is certified since December 12th 2020 according to the ISCC framework, which allows the terminal to be part of a BioLNG supply chain.

Since January 1st 2021, and as long as no regulated BioLNG service is available (expected end of 2021), the conversion of a biomethane certificate in a BioLNG certificate at the LNG terminal of Zeebrugge is possible following the principles described below.

At the LNG terminal of Zeebrugge, two small (re-)liquefaction units, referred to as recondensers, are used in the process flow for regasification. In those recondensers the physical contact between cryogenic LNG and gaseous natural gas enables the gas to be cooled down and liquefied. 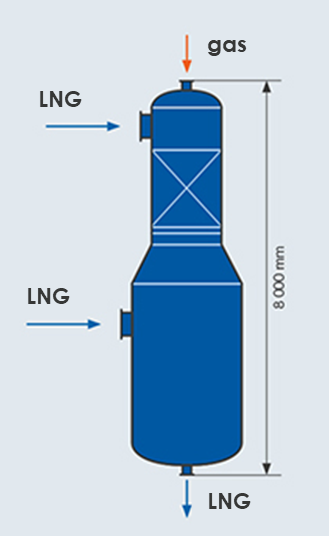 The LNG exiting the recondensers can either return into the LNG storage tanks or be pumped and regasified (in vaporisers) before being injected in the downstream high pressure transmission grid.

LNG from the reservoirs can be loaded in (small) vessels via the terminal jetties or in containers/trucks thanks to the available truckloading bays.

This technical process enables terminal users to convert a biomethane certificate into a BioLNG certificate. The possibility to convert certificates of this conversion is related to the usage of the recondenser and in accordance with the mass balance principles (cfr. Renewable Energy Directive). As the demand for converting certificates might exceed the capability of the recondensers, a transparent and non-discriminatory demand procedure and allotment rule are required.

The possibility to convert the certificates is allotted as follows:

Fluxys LNG will inform the participating terminal users as soon as possible of their allotment via an allotment form. The allotted quantities will be reported in a quarterly report, which will be sent ten (10) business days after the end of the quarter.

To be eligible for this process, you must: